What is Niemann-Pick disease?

Niemann-Pick disease is a group of rare, severe inherited metabolic disorders in which sphingomyelin, a type of lipid, accumulates in cell lysosomes because the body cannot transport these lipids nor cholesterol into the cells. There are three types of Niemann-Pick disease: type A, type B, and type C.

Among these types, the age of onset and the specific symptoms of Niemann-Pick disease are highly variable.

These mutations are inherited in an autosomal recessive pattern, which means that both copies of the defective gene must be inherited for someone to get the disease.

What are the symptoms of Niemann-Pick disease?

The vast symptoms of Niemann-Pick disease are related to the specific type of the disease and the organs that have the accumulation of sphingomyelin. If this accumulation occurs in the liver or spleen, symptoms may include a reduced appetite, abdominal enlargement, low blood platelet levels, and/or pain. If this occurs in the central nervous system, symptoms may include slurred speech, difficulty swallowing, impaired eye movements, and/or gradual loss of intellectual abilities.

How is Niemann-Pick disease diagnosed?

Niemann-Pick disease is diagnosed based on a clinical observation and recognition of the characteristic symptoms of the disease. After these initial observations, diagnosis is confirmed through laboratory tests to either evaluate the function of proteins in the body or identy mutations in the NPC1 or NPC2 gene.

What are the available treatments for Niemann-Pick disease?

Treatment for Niemann-Pick disease depends on the type and is focused on the management of the symptoms of the disease as they occur.

Anti-seizure medications, anti-depressants, and sleep-inducing medications can all be used for their respective purposes.

In addition, there are some therapies currently being developed for Niemann-Pick disease, such as the drug, miglustat, and enzyme replacement and gene therapy.

Where can I find out more about Niemann-Pick disease?

“Save Our Medicine:” NPC Families Fight to Save Experimental Medication Access (Pt. 3) “Save Our Medicine:” NPC Families Fight to Save Experimental Medication Access (Pt. 1) INTERVIEW: Changing the Future for NPC 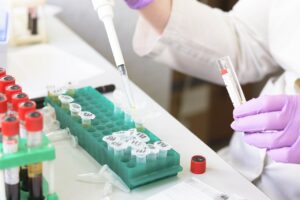